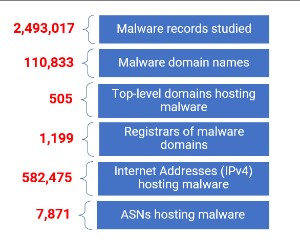 Posted at 17:06h in Measuring and modeling of Cybercrime by David Piscitello

Interisle Consulting Group has published its annual Malware Landscape 2022: A Study of the Scope and Distribution of Malware. The study analyzes 2.5 million records of distinct malware events collected by the Cybercrime Information Center to determine what malware was most prevalent, where malware was served from, and what resources criminals used to pursue their attacks.

Among the major findings, the study reports that

The study also reports that malware attackers made effective use of cloud services, including file sharing services, code repositories, and storage services. Most uses of anonymous file sharing and code repositories are well-intentioned; however, the study data show that malware attackers used these services to distribute source code, attack code, and files containing compromised credentials or cryptographic keys.

For our malware studies, Interisle developed and maintains a taxonomy that is based a classification proposed by the Computer Antivirus Research Organization (CARO). The taxonomy extends that original effort in the context of cybercrimes as defined in the Council of Europe’s Convention on Cybercrime.

A summary of the study can be found at https://www.cybercrimeinfocenter.org/malware-landscape-2022.

Please submit comments or questions by email to criminaldomainabuse@interisle.net.

We use cookies to ensure that we give you the best experience on our website. If you continue to use this site we will assume that you are happy with it.Ok